We caught the bus on Saturday. It took a long time to get out the door, last checks and cat hugs, and so we were not as on time as we might have been. I was wearing boots, tights, dress, sweater, fingerless mitts, jacket and hat. I was carrying the banjo, a laptop bag, a shopping bag of miscellanea now well perforated by knitting needles, and my backpack, which I am afraid to weigh because I think that knowledge will impede my ability to carry it. Unfortunately, it was a nice day. Warm and sunny. It was never a nice day. This was a cruel trick and I was dressed absolutely incorrectly to be speedwalking with half again my own weight on my back. There was nowhere for the heat I was producing to go, as I had carefully covered all of that nasty exposed skin. The heat pooled in my stomach. I watched my boots walk under me and gently considered vomiting.

This went on for a long time, subjectively. I began to think of forced marches (I was hurried by the urgency of himself, who was afraid we were going to miss the bus). I began to think of Russian peasants in chains dropping dead in the snow. I could not properly enjoy my self pity, because I had to concentrate on the non-barfing.

Then there were stairs. I looked at the stairs sadly, as an unexpected but unsurprising cruelty in a generally hard world. I descended the stairs.

He had gone ahead and was standing in front of a bright green bus, gesturing at the driver through the windshield. The driver did not want to open the door, but he did. He sort of tried to shut it on us a few times, but we sedately pretended it wasn’t happening and were permitted to put our damned packs under the bus.

And then, o bliss, I stripped. Jacket, sweater, mitts, boots, socks, hat. I smelled like a man-made pond, probably because of the wool, which was a shame because I had just showered. We trundled off out of Vilnius, my heart rate went down, and I settled in.

The countryside of Lithuania looks not unlike Iowa. But more, you know, foreign. EurIowa. There were tiny tv screens in the backs of the seats, like in a plane, and Aaron tried to watch movies while I poked him in the face and generally made myself impossible. I can’t read in vehicles, it makes me carsick, and one must keep oneself entertained somehow.

The sun went down for a pink and gold eternity. There was a green band across the horizon that hurt me a little. The colour made me homesick for a life I had never had. It made me remember the sea around me. I wondered again (I have been very suspicious about my origins since I was four) if my parents were hiding my selkie skin in a trunk somewhere.

There were cows. I looked at the cows. The cows ignored me. Yea, verily, and so has it ever been.

We got into Warsaw around ten. We had no internet (tragedy, calamity, woe and woe!) and the bus station was more like a bus stop. Food, we needed food, dammit. But this is what I do best, walk aggressively through foreign cities at night, so off I went. Left or right. Both are dark. Both curve. Left, then. AhaHA! Yeeees, Pinky. A markety thing. A kebab shop. A very small man with no teeth on a bench next to a sleek and alarming couple listening to techno on their phones. Ah, but the kebab shop makes me nervous, there is a certain desolation about it, and I carry on. People stare at me. Men nudge each other and jerk their chins towards me. I firmly believe that this is because of my hair, because I have controlled all the other variables. Plus, it doesn’t happen when I wear a wig, so it must be the hair. But I am bold, I am firm, I glare and stride and manage to project a force bubble of she-might-hit-you. I find a route 66 themed burger bar where two pretty young Poles manage to communicate to me that they don’t take Euro. I walk back through the night to the bus stop. I retrieve my wallet. I go back. The sleek couple is now baffled by me and she waves her excessive fingernails towards me as I go past. I pay for my burgers and wait in the corner of the tiny bar, feeling oddly superior because it is an American place and there are license plates on the walls. Hah, I think, Wyoming. YOU have never seen Wyoming. But I have. I am smug about this, for some reason. After about twenty minutes, I buy a shot of bourbon, because I am bored and because it will be my birthday in half an hour.

I go back and we eat our burgers, which are enormous and a good bit more raw than I’m used to, but oh it’s good to have food. I pull out the banjo and noodle as people collect slowly for the Budapest bus, which, when it arrives has A FREE COFFEE MACHINE THAT IS RIGHT NEXT TO OUR SEATS AND HAS MOCHAS AND LATTES AND COCOA, OH MY. We proceed to get jacked up. The bus is devastatingly comfy. We watch I Am Legend, which he has never seen. It is a good birthday.

I sleep in that shallow cobwebby way that you do on a bus, maybe two hours. Time passes pleasantly. The sky starts to lighten and we come into the foothills of the Tatra Mountains in Slovakia. 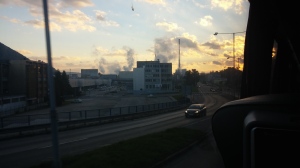 Something, something, mountains, beautiful, you get it.